Kevin Wins Today or Materialism is my Friend 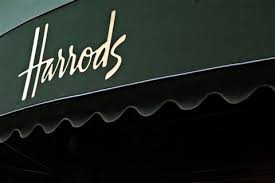 Kevin wins today.  He really, really wins.  I must admit that I can make it hard for him to win, so we must give him his due.
Two weeks ago, I threw two parties for about twenty people at each.  (Which is why, if he ever reads this, I bought a kitchen table that seats twelve although he swears we never entertain.)  I did not know exactly who was coming or how many would be there or really what it was all about.  I actually found out about this party he was throwing through my dear friend Anne who was working with him on a project that included said party.  She called to give me a heads up that he volunteered to have a party at our place instead of at a restaurant because it would be cozier.
When I found out this information about a week before this event was to take place, I said we should get take out and put it in our dishes and lie about who made it.  This did not go over very well.  So we did what we always do which is a BBQ, chips, salad, my sister in law’s fruit salad, and something to drink.  I bought dessert, though.  So I spent two half days and one full day working on this.  The next night was supposed to be another twenty people so I prepared for that as well.  Only two people ended up showing up, but I still put in the effort and it so counts.  (Although when Anne called to tell me only two would be there and she would be one of them, I put the sour cream and salsa back in the containers and started cleaning up the cute serving dishes I had.  There needs to be more than four people before I will dirty dishes when containers will do.)
At the first dinner where there were people, Kevin made announcements and introductions.  When he stated he had it at the lake because he thought it would be easier, I started to choke.  After he was done speaking, I decided to make an announcement.  It went as follows:  “I believe this would be a good time to let everyone know that my favorite jeweler in town is Saunders Jewelry.”
Now most people laughed, knowing exactly whom this announcement was for and the purpose of it.  Kevin continued on with his evening.  I never heard a word about it until a couple of nights ago at 11pm.  I am five minutes from sleep, having wretched my guts out that day, when my loving husband turns to me and says, “Were you serious about Saunders Jewelry?”
My response after a stifled yawn and a stomach gurgle, “It is always nice to get jewelry.”  My thought: “Why would a person make a random comment about a local jeweler to a bunch of strangers from out of town if a person were not serious?”
Well, last night he had a lot of local dental professionals over and he did 75% of it.  He scheduled it without checking with me and so the kids had after school activities and I was sick and I couldn’t spend the day organizing and decorating and setting up.  I think he realized that it actually takes a bit to do this seeing as half the guests showed up before the tables were set up.
So at 10am, I received a call from a nice gentleman informing me he was from Saunders Jewelry and that I had a credit at the store and to come pick something out.  Of course Kevin gave me a HUGE allowance, knowing that if earrings cost over $20, I have to meditate and possibly medicate except for a few special occasions like giving birth and anniversaries.  This time, however, I did a pretty good job of seeing what I liked and just getting it.  It was 80% less than my “allowance” but more than $20 and I did not feel the need to do a traditional Native Aboriginal Naked Walkabout before buying earrings.  I think it may have something to do with going from the stomach flu to a chest cold that my kids’ doctor informed me “runs two weeks, give your family some cough medicine and good luck to you.”  Add a nervous breakdown from my eight year old making me feel like a terrible mother, and you can drop a pretty penny at the local jeweler trying to make yourself feel better.
So Kevin wins this week.  Part of me wishes he would just ask before he invites 20 people over for dinner, but I will settle for jewelry.  Does that make me materialistic?

2 responses to “Kevin Wins Today or Materialism is my Friend”