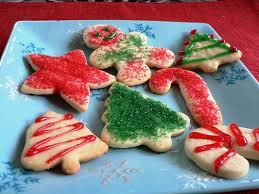 With the holiday season upon us, I find that my deficiencies are magnified.  (Although those of you who actually read this on a semi-regular basis are probably wondering how the holiday season is different from any other day of the week in the magnifying my deficiencies arena.)  In particular, I realize I was not meant to be a “homemaker.”  -At least not one that cooks, cleans, or makes decorations for the home.
I was at the grocery story trying to buy unprocessed foods for my family when I walked by the ready-made cookie dough.  I am supposed to make two-dozen cookies for a church activity on Thursday.  As I slowed down between the refrigerated area and the baking goods aisle, I started to question my development as a sugar cookies manufacturer.  From the age of ten to about eighteen, I made sugar cookies by myself.  I rolled out the batter, cut them into Christmas shapes, baked them, re-rolled and cut the dough until there was only a tiny bit left, baked all those, made homemade frosting in multiple colors, frosted and decorated the cookies and then cleaned the whole mess up.  (My mother didn’t thank me enough for this, by the way)  I did this every year like clockwork.  In fact, I have an unhealthy addiction to frosted sugar cookies due to this habit, I believe.  So with this as my background, I wonder why have less than zero desire to make sugar cookies now.  I used to love it and now it is a pain to buy the tube of dough and roll it out a few times to make a couple tree shaped cookies.  Am I giving up on a cherished tradition by not making the dough by hand?
And then I remembered the book I read on the biography of Betty Crocker.  She isn’t a real person, by the way.  It was more a history of the corporation, but I am going to personify the company because they have and why stop a good thing?  So women used to pride themselves by how good a cake they could make, according to Betty.  Many women wouldn’t use a mix when they first came out for shame of it all.  At the same time, many people found that the mixes worked better and tasted better because all of the ingredients were regulated and sifted nicely.  (I personally think brownie mixes are generally better than homemade.)  It saved women time to use the mix and many found it to be a luxury.  Now when we bring a “homemade” cake to an event, it is generally from a box.  (Unless your name is Gail Welch; then it is made from scratch no matter what.)
So I thought about this history and realized that I was simply carrying on the evolutionary process, as it should be by using pre-made sugar cookie dough.  This was created to ease my life, which is hard enough when making sugar cookies with three children.  I still make the frosting by hand, but now I only make green, red and white instead one of every color in the food-coloring box.  Stars can be white instead of yellow.  I have spoken.  And I really only like to make the frosting because I like the cloud the powdered sugar makes.  I can pretend I am inhaling a different white powder and then pretend nothing bothers me for the rest of the day.
So I guess this is not a deficiency.  It shows how adaptable I am to evolutionary changes. I do, however, still have issues with tadpoles turning into frogs, but only when they are doing so in a bowl in my kitchen.  In fact, next year I may buy the pre-cut sugar cookies to show how evolved I am (and to make one less thing I have to clean up).
Now if I could just figure out how to make Rhodes rolls (pre-made frozen rolls you just have to defrost and stick in the oven at 350 for 15 minutes which supposedly every Mormon on the planet knows how to make except for maybe three.)

This entry was posted in Uncategorized and tagged cooking, homemaking. Bookmark the permalink.