What’s your Opinion on What’s Appropriate?

I’m thinking more about what I’m writing lately.  I got called out on a blog post and a Facebook post.  Perhaps I don’t think before I write as much as I should.

But do the names need to be included at all?

I thought I wrote an incredibly vague post and then found out not everyone thought it was vague.  (And then I found out it could apply to more than one person I knew and so that caused some confusion because I realized it was too vague.)

What do you think?  Do you think you should feel bad about misinterpretation or a joke?  Should a person remove a post if it is taken the wrong way?  Or does it depend on how wrong it was taken?  Is this blog my interpretation so I can say whatever I want or does that disrespect others around me?

Should I shut down the blog and stick with fiction?  Remove myself from social media and just watch others from my desk?

Move to Hawaii and learn to surf?

Okay.  Having tried surfing, I think that last one won’t be happening.  No matter how many 19 year old boys try to teach me.  And I’d prefer England over Hawaii.

But I think I’m digressing from the point.

I recently listened to a Fresh Air Podcast on the Univision anchor Jorge Ramos who was thrown out of a news conference by Donald Trump’s body guard.  It brought up freedom of the press and avoiding topics you don’t want to answer.  (Trump didn’t want to answer specific questions about his immigration policy.  It’s a great podcast and brings up some great points.  Listen to it.)

But is a personal blog the same thing?  Do I have the same freedom to write my viewpoint the way I see it?  Is there a line?  Can I say what I want unless it’s just mean?

I read a blog once where the author posted pictures of little kids and made fun of the fact four or so girls wore the same style dress.  Is that too far?  Are little kids the limit?  Would it be okay if it were four women wearing the same dress to the holiday party? 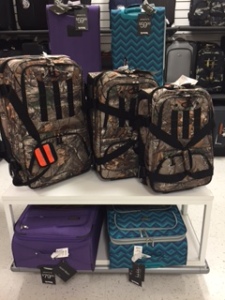 If you need three pieces of camouflage luggage, you’re bringing too much while hunting. (This statement applies to no one in particular)