And now for the rest of Mother’s Day weekend.

(Sorry it’s late.  I became ill.  When I am ill, I revert to the 1800’s and take to bed waiting for someone to spoon feed me broth.  This never actually happens.)

If you want to forget it’s Mother’s Day, I highly recommend finishing a half marathon the day after spending 9 hours at Disneyland.  Then AFTER the half, spend the next 9 hours at California Adventure.  You will be so sore, you will forget what day it actually is.

At least that’s what happened to me.

I’ve been suffering from Plantar Fasciitis so I didn’t expect to finish.  I actually didn’t plan on doing it at all but there wasn’t anyone to sell my bib to and when you get to Disneyland you become possessed and think anything is possible if you wish upon a star.

So I walked down the green carpet and picked up my stuff and with the music and the people and the fairy dust, I declared to Amber that I was going to do it.  I thought I would just walk through the parks and meet all of the characters they had along the race. Then I would demand a metal because I’d already paid for it.

Amber and Brittany ran.  I said goodbye and turned on some NPR.

Because I didn’t care about my time, I posed. 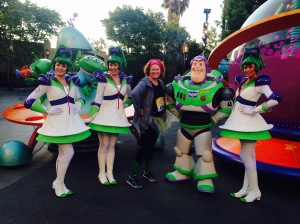 I’m unsure I will ever run in tulle again.

I find standing next to chipmunks to be slimming

I want to do a Star Wars race.

And then I was out of the parks.

Here’s the thing.  I was almost halfway by then and I thought I could do it.  No biggie.

13.1 miles without training is a biggie.  But I kept going.  And I finished.

I may not have told my podiatrist I did this.  He was not sure it would be beneficial to my foot.  I have yet to notice a difference but I may have put my healing back a while.

It’s not my fault.

And there was that stupid fairy dust…

(I won’t be entering another race until I’m fully healed, however.  I at least learn.  Sometimes.  When I limp.)

I signed up for the Disneyland Tinkerbell half marathon.  Two of my friends decided to go with me.

Then I got plantar fasciitis.  So I stopped running and now I’m trying to train on an elliptical and bike.  My two friends keep running.

I want to finish all together and have fun and not be exhausted so we can spend the rest of the day just enjoying life.  And eating whatever we want afterwards because we just ran and burned 15 million calories.

And if I don’t burn 15 million calories, I won’t feel like I can eat whatever I want.  And, really, what is the point of entering a race if you can’t stuff your face after?

I entered this race two days after my miscarriage when I decided I didn’t want to be around for Mother’s Day.  So why not run a race?  I’ll get back into shape, lose weight, get endorphins, have something to concentrate on.

But my body said no and I developed foot pain and now I have to work out around it.  I will probably be walking 13.1 miles and that’s just stupid.  I did that last year and I did not handle it well.  (I pouted the whole time I drank my frozen hot chocolate and ate three cupcakes.)

I don’t want to walk this race.

I want to jog this race very, very slowly.

Even my spray tan is sad and crying.

At this time of year, I generally have a constant headache.  It is either a “Christmas is how many days away?” headache or the “the year is ending and I have done what with it?” headache.   And because my birthday is in February, I also have the “I’m turning… and I don’t even have a bucket list” headache.  And the fact that the theme of my headache keeps changing, causes a headache to fill in the gaps while the stresses alternate.

Recently I found the blog called Thoughts Appear.  At the top of her website, she has 30 before 30 and 35 before 35 pages.  She accomplished 30 things before she turned 30 and now she is working on 35.  I love this idea.

I will be 40 in a little over a year.  I would like to accomplish 40 things, but I’m not sure a year is enough time.  So I’ve decided to develop a different, yet equally worthwhile goal.

I have decided to plan out my midlife crisis.

I do not want to turn 40.  I have not accomplished what I would like with my writing, I do not have a PHD and I live in suburbia as a stay at home mom.  I am in the PTO. I may even be on a couple committees.  I think this makes me a perfect candidate for a crisis.

And I want it to be good.

I did not accomplish last year’s resolutions.  I tried to have a car chase by going 35 in a 25 mph zone, but I just pulled over when the cop lights went on.

I don’t have it all planned, but I have a couple ideas running around.

I am definitely getting into shape.  I plan on running a race every month from March to September so when I do turn 40, preferably in another country with a cabana boy, I will look incredible and it will be completely realistic for the cabana boy to have the hots for me.

And I plan on having a secret rendezvous with my husband at Sundance Film Festival where I will make him call me Fifi all weekend.  The tips of my hair will be aquamarine, to match my fake nails.  (The fact that I just announced this on the internet makes me realize I may need to work on perfecting my secrecy techniques.  I blame it on my crisis.)

And I am SERIOUSLY considering joining the Fruit of the Month club.  It’s just a really big commitment.

So over the next few weeks, I will be developing my crisis plan.  If you have any suggestions, please send them my way.