It’s been a Heavy Summer

Have I mentioned this summer has been difficult to blog?

After I had my miscarriage, there was an ill timed pregnancy announcement.  It hurt.

I wanted to make sure I didn’t do something similar here.

There has been a difficult death in the family.  Trying to find humor in life or finding the irony in situations just seemed wrong.  There is no humor or irony in death sometimes.  And I don’t want anyone to think it doesn’t matter by carrying on as if nothing happened.

Because something happened and it was important.

My other problem this summer is due to my desire to write a scathing blog about a couple who divorced their spouses to be together.  I don’t believe in public shaming.  And I know I don’t know the whole story.  I just know the end result and it’s sad.

So many people are affected by two people’s decisions.  Or just one person’s.  It’s been hard to wrap my head around it.

Don’t get me wrong.  We’ve had fun this summer.  We’ve been to camp and seen family and gone swimming and just chilled.

It’s just also been a heavy summer that needed some quiet time.

I think I’ll be grateful for school to start.

When my kids start asking me if I knew Sacagawea when I was a child.

At least Build A Bear is having a resurgence.

My last child is in school.  I now have all this free time.  People keep telling me I have free time.  Or they ask me what I’ll do with all of my free time.

Because now that my last kid is in school, I no longer have laundry.  My pantry is perfectly stocked and the groceries are delivered.  My refrigerator has nothing growing in it and never will again and when all of the kids walk out the door, their toys now float back to the right spot.

The bathrooms never need to be cleaned; the floors don’t need vacuuming.  The bills are all paid for the rest of my life.

My husband will never again forget something he wants me to do/pick up/ deliver.  “When ever is fine, but what are you doing now?”

Snow will fall everywhere except for my driveway and sidewalk and the leaves blow magically away.

My kids are in school so I won’t need to volunteer and help the teachers or go on field trips or be a part of the PTO to make sure I know what’s going on in their school.

I won’t need to prepare for 3:15 when chores need to be done with my supervision to make sure they are done semi ok; when piano needs to be practiced; when homework needs to be completed; when kids need to be taken to sports; when dinner needs to be made; when reading needs to be supervised; when “playing” occurs with crying; when computer time needs to be regulated.

I am so INCREDIBLY lucky I have all this free time. 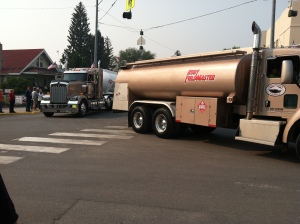 Ooh Look! Semi-trucks!  I think I’ll learn to drive one with all of my free time.